One of the features of the Formtek Engineering Data Management Module (a.k.a EDM Module) is the ability to preview AutoCAD drawings in Alfresco Share. In previous EDM Module releases, you could only preview the drawing space (model or paper) that was active when the drawing was last saved. Starting with release 3.0, a multi-page PDF rendition is created that includes the model space and all available layout views. So, when you display a drawing in the Alfresco Share Document Details window, each available drawing view can be previewed as a separate page in the preview pane. For example, the drawing below is displayed as a 3-page PDF preview: 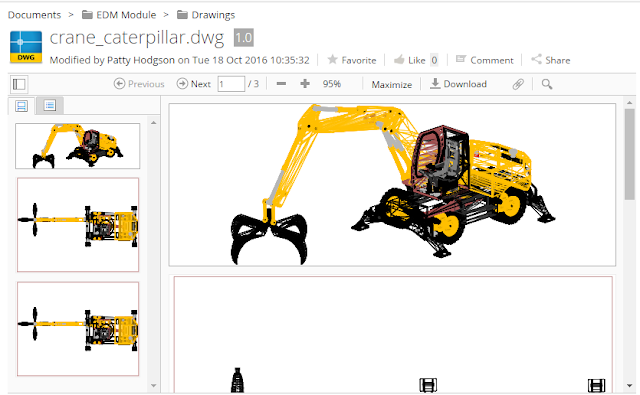 When we switch the Side Bar view to display bookmarks instead of thumbnails, you see the model space as the first page followed by two paper space layout views, Layout1 and Layout2, as the next two pages in the PDF preview: 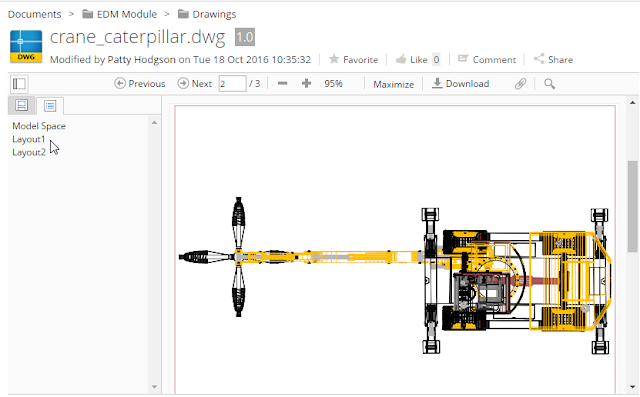 When this drawing was first created as a new drawing in AutoCAD, the empty model space view and the two empty paper space views were created by default. However, the designer who created the drawing content only ever worked in the model space view. The layout views were never accessed, and thus, remained uninitialized in the saved drawing as you can see by the two empty thumbnails for Layout1 and Layout2 within AutoCAD: 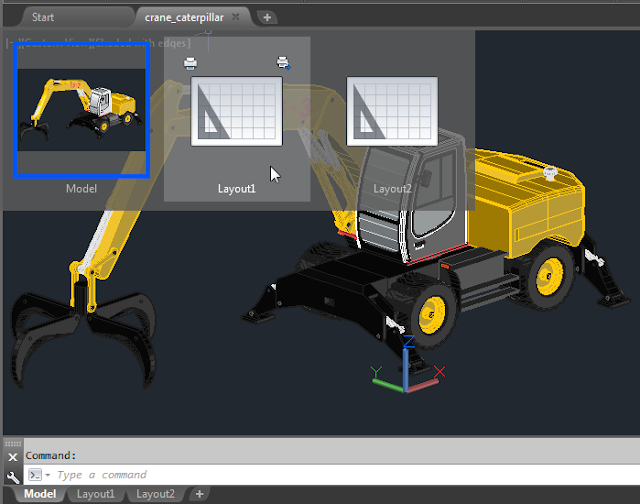 
1.      Open ALF_HOME/formtek/edm_module/bin/edm-cadtopdf.sh (on Linux) or ALF_HOME\formtek\edm_module\bin\edm-cadtopdf.bat (on Windows) for editing:
a.       Add the -nouninit parameter to the end of the following line:


b.      Save and close the file.
Uninitialized layout views will no longer be included in any newly generated PDF renditions. For example, when this same drawing is uploaded a second time and previewed, you can see that only the model space view is available in the PDF preview: 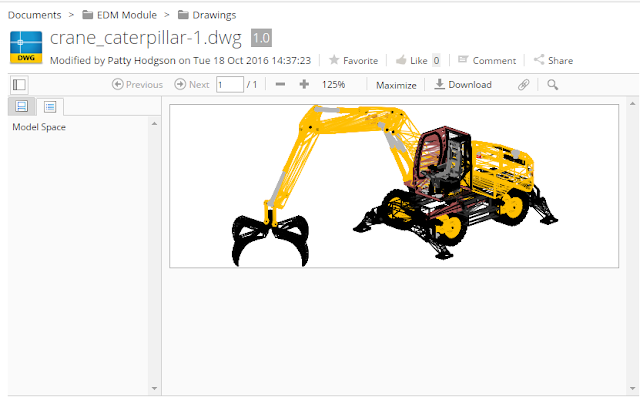 Exporting Documents from Ephesoft to Alfresco via CMIS: Identifying Alfresco Aspects and Properties

Configuring Ephesoft to export documents to Alfresco via CMIS is a fairly straightforward process:

(Both of the folders above represent the default locations of those properties files, but your environment may be configured differently.)

Ephesoft has this overall process well-documented on their public wiki (http://wiki.ephesoft.com/cmis-export-plugin).  However, when defining your mappings, it can be difficult to determine whether you’re dealing with aspects or properties on the Alfresco side.  You’ll need to look through the content model to know for sure, and this article will tell you how.
If the documents are going to be identified as a custom content type in Alfresco, you’ll need access to the custom content model definition file.  Once you find the custom content model definition file, you can use the steps below to understand how to read it.

If you’re going to simply use Alfresco’s standard content model, the content model configuration file can be found inside the following jar file:

(the actual name may differ depending on your Alfresco version)

Copy that jar file to a temporary location, and change its extension from .jar to .zip.  Extract the zip file to a temporary folder, or use a zip reader to navigate through the structure to find the alfresco\model\contentModel.xml file.  Open the contentModel.xml file in an editor and look for the Alfresco aspect/property that you want to populate.  For example, if you want to populate the cm:description field inside Alfresco, search for “cm:description” in the xml file.  It will look something like this: 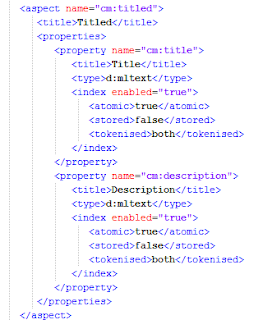 Work your way up the xml structure from the cm:description line, and you can see that cm:description is a property under the cm:titled aspect.  This means that the mapping to the Description field in Alfresco must be defined in the aspect-mapping.properties file in Ephesoft.  If you’re using CMIS 1.1, you can define that mapping like this:

(Refer to the Ephesoft wiki page for details on how to set up the same mapping for CMIS 1.0.)

You can also combine multiple mappings onto a single line by separating them with a semicolon, like this:

This example (also for CMIS 1.1) executes the same mapping as above, and also adds the cm:auditable aspect, populating the cm:creator value with the Author index field from Ephesoft.

Most well-designed custom content models will use aspects instead of properties, so you’ll rarely have to add anything to the DLF-Attribute-mapping.properties file other than the Alfresco document type.  However, older versions of Alfresco didn’t provide good support for mapping values into aspects, so it may be necessary to use properties instead of aspects in those cases. 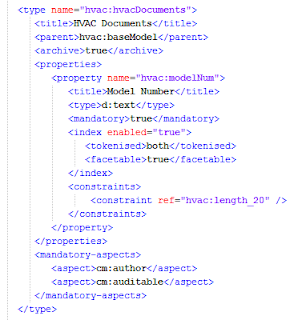 Work your way back up the xml structure, and you’ll see that hvac:modelNum is a property of the hvac:hvacDocuments type.  This means that the mapping to the hvac:modelNum value in Alfresco must be defined in the DLF-Attribute-mapping.properties file in Ephesoft.  You can define that mapping like this:

(The syntax for the DLF-Attribute-mapping.properties file is the same for both CMIS 1.0 and 1.1.)

With the combined aspects and properties mappings described above, you can successfully map a variety of Ephesoft index fields into Alfresco fields via CMIS.